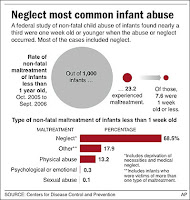 The US Centers for Disease Control and Prevention reported that in 2006, 91,000 babies were mistreated in their first year. Infants could have been mistreated by their natural parents (50%), non-relatives (17%), their mother's boyfriend (17%), step parents (6%) and others (10%). This figure amounts to over 23 in 1000 of 4 million babies in the survey, of which 7.6% were less than a week old. Five hundred of these cases were fatal and of the remaining non-fatal cases, the majority of cases was due to neglect (68%) while 13% were due to physical abuse. Neglect is defined as a failure to meet a child's basic needs which are housing, food, clothing and access to medical care. This indicates a need to provide more counseling to first time parents and pregnant women before they are released from the hospital. Education is key to the prevention of child neglect and unintentional abuse.


Shaken Baby Syndrome (SBS): One in 4 shaken babies die. More than 60% of the victims are male while almost 80% of the perpetrators ("shakers") are male. Victims range in ages of a few days to a few months old with the majority injured between 2 and 4 months. This is because crying in babies is at its peak between the 2nd and 4th months before crying subsides after the 5th month. Babies on average can cry for 3 hours each day. Parents and care givers who lose patience over crying infants forget that what might start as a rocking motion to soothe a crying infant can lead to shaking. An infant should never be shaken. Babies have weak neck muscles and large heavy heads. Shaking makes an infant's delicate brain bounce back and forth inside the skull, causing the brain to bruise, swell and bleed. The injured brain can lead to permanent and severe brain damage or death. Severe shaking can also damage the retina of the eye causing internal bleeding leading to blindness. Hospitals report neck and back damage and dislocated bones. The majority of infants who survive severe shaking will have some form of neurological problems like paralysis, seizures; mental disabilities such as cerebral palsy, speech and learning disabilities or mild to severe mental retardation which may not be visible until the child reaches 6 years of age. Such babies may require lifelong medical care.


Babies that show the following symptoms may have likely been shaken:


Crying is normal and good for a baby. It's the way newborns communicate. Babies cry when they're wet, hungry or trapped (check for loose threads that may have entangled around fingers and toes).

To avoid shaking a baby, adults should "time out" from a crying baby. Swaddle and lay the crying baby in its own crib and walk away for 10 minutes. Babies should be covered so that they are not feeling too warm nor too cold. Motion from rocking or a moving car; and steady sounds similar to what emanates from a clothes dryer or a dishwasher can also soothe a baby.

Sudden Infants Death Syndrome (SIDS): SIDS claims the lives of 2500 infants each year in the United States and is the leading cause of death among infants between 1 month and a year old. SIDS is associated with sleep and hence referred to as "crib death." Victims do not show signs of suffering. The following increases the risk of SIDS: smoking, drinking or drug use during pregnancy, poor prenatal care, prematurity or low birth weight, mothers younger than 20, smoke exposure following birth, overheating from excessive sleepwear and bedding, and sleeping position (infant laid on its stomach).

Sleeping face down puts pressure on a child's jaw, therefore narrowing the airway and hampering breathing. It is also believed that loose bedding creates pockets that can form around an infant's mouth and nostrils. Infants that breath in and out of the same pockets can accumulate carbon dioxide in their system and suffer from oxygen depletion. Furthermore, seemingly normal infants may have an abnormality in the part of their brains that help control breathing and awakening during sleep. If the baby were breathing stale air or is not getting enough oxygen, the brain usually triggers the baby to wake up and cry. Waking and crying changes breathing and heart rates, making up for the lack of oxygen. The American Academy of Pediatrics recommend that all infants younger than a year old should sleep on their backs. Death from SIDS dropped by 50% since the recommendation was published in 1992. Placing infants on their sides to sleep is not advisable either as it encourages infants to roll over onto their bellies during sleep. Conscious rolling usually starts around 4 months and at that point, babies may choose to either sleep on their backs or pick a position on their own.

How else to reduce the risk of SIDS: