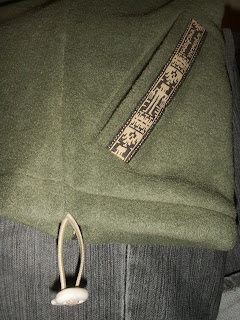 How often are you tempted to buy clothing with cute bows and sashes for your little girl? And jackets with heavy toggles at ends of cords? Be aware of the dangers associated with such designs. States like New York and Wisconsin have passed regulations regarding the location and allowable length of drawstrings, ties and cords in children's clothing. This is because dangling ties and cords have caused accidental dragging and strangulation of children. Long cords with thick ends can get caught between tight spaces of moving vehicles and playground equipment. Young children are not able to extricate themselves from these situations; resulting in major injuries and even death... definitely not the designer's intended outcome.

For this reason, design or select clothing appropriate to the age of the child. Think of age-grading clothing in the same way that toys are labelled for specific ages only. Newborns are the least mobile of children so drawcords at the bottom of prambags do not present a dragging hazard as much as a cord dangling from a 5-year old's jacket. Think of a loose cord trapped between the doors of a moving bus as a child attempts to leave the bus. For this reason, outerwear should not have exposed ties nor dangling cords that extend past the jacket's or pant's hemline.

The shorter the dangling length, the less of an entrapment hazard the cord presents. It is also advisable that such cords do not have knots at the ends. Knots are made at the ends of cords to prevent unraveling. But the thick ends can get trapped within tight spaces.

To prevent strangulation, some US States have passed laws prohibiting drawcords that encircle the entire neck area.

Drawcords that encircle the waist area to control fullness, can be kept from pulling all the way through if it's stitched down in at least one spot. This eliminates the risk of entrapment and loss of circulation.

Use the same caution when selecting accessories such as hats, gloves and footwear. There is a reason why baby's sneakers have Velcro closures instead of laces.
Posted by Ellen Uyenco at 12:45 AM